Last week I was at a gathering with a group of other church leaders, and Adrian Hurst taught a session that included a number of elements of reflection and discussion. At one point we were in groups and were asked to share which areas of our spiritual lives were going well. I spoke a bit about the renewal of my prayer life recently (that I wrote about here). I told the story of being challenged by the one-liner at the conference about the kings not availing themselves of the temple.

I then told them what happened next.

When I got back from the conference, I half-recalled a talk I had heard a few years ago by Jon Tyson. I have since tried to track it down but have not been successful. Tyson spoke of the disciples falling asleep at Gethsemane and Jesus’s subsequent surprise that they could not pray for one hour. I knew that it had been quite a while since I had spent an hour in solitary prayer and that it would be something I would find quite difficult.

I also remember Tyson mentioning a ‘prayer wheel’ that he has used to help people grow into extended times of prayer. This wheel is split into twelve segments, each for a different type of prayer. The idea is that whilst simply praying for 60 minutes might seem daunting, spending 5 minutes in praise seems doable, as does spending 5 minutes in intercession, 5 minutes in thanksgiving and so on. Working around the wheel one section at the time then means that before you know it a lengthy time of prayer has passed. 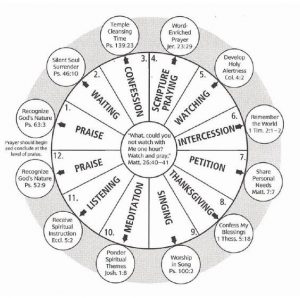 When I got back from the conference I started small. I decided to go for 30 minutes to begin with, and set some time aside on my day off and spent two and a half minutes in each section (using an actual timer). It was an interesting experience. I was expecting it to feel a bit forced to follow this kind of structure, but that wasn’t the case. The different segments of the wheel flow very nicely into each other in a way that allows the prayer time to feel natural. I also expected to feel a bit rushed. Two and a half minutes seems such a short amount of time, but I found that when I was actually praying it allowed me to get quite a lot in.

My biggest reflection on praying round the wheel is how it changed the nature of what I prayed about. Some of the sections were where I had majored on in prayer up to that point (intercession, petition and thanksgiving – with a bit of praise). Other bits I had spent less time on or omitted entirely. This new approach felt much more God-centred, and created space to lift my head from the challenges of life to who God is and what he was doing. It built in a rhythm where I was hearing his voice much more clearly and sent ripples through lots of other areas of my life (I will unpack this more in a coming post). I have since tweaked the wheel, adding an additional segment for ‘review’ where I give thanks for answered prayers and remind myself of how God has worked in my life in the past. I have also split the intercession segment into three – time praying for people I know, time praying for my church, and time praying for the nations (including my own nation). So for me the wheel is now made of 15 segments.

The other thing I noticed is that my prayer stamina began to increase. I built a rhythm into my life for the next few weeks of praying round the wheel with two and a half minutes spent in each section, and it wasn’t long before I was ending the prayer time feeling like I wasn’t finished and was still spiritually thirsty. I decided to give the full hour a try and found that the impact of it was even bigger. There is something transformative about extended time in God’s presence, and I now realise how much I had been selling myself short of what God has for me in the briefer and more functional way my prayer life used to operate.

All that said, I know there is much more to push into. I have recently been reading Ravenhill, who writes (in his characteristically blunt way), “ministers who do not spend two a hours a day in prayer are not worth a dime a dozen, degrees or no degrees.” I don’t think I have the stamina for that yet, but the desire to grow is there.

I wonder how your prayer life is going. Quite possibly it’s going great and if so, let me encourage you to press on. But if you identify with where I was at, let me invite you on the journey I have been on. Prayer has changed my life. It might just change yours too.