In this session, David looks at differences in culture from a Western Perspective. Sharing stories from his own travels and others, David illustrates how culture is every part of our lives through how we dress, how we interact with others and more.

“Entering another culture can be like playing a game without knowing the rules.  What’s more, there is no complete written record of the rules, and the other participants cannot tell you the rules, though they immediately know when you have broken one.”[1]

Note:  Worldview is essentially a narrative not a list of abstract propositions. 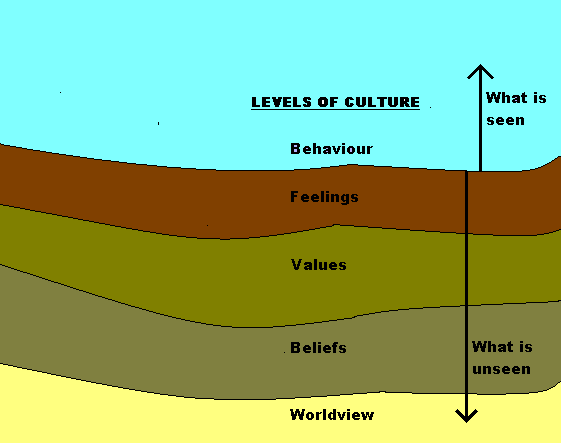 Where are we?  In a beautiful though transient world, the creation of the God in whose image we are made.  Not an alien world as the Gnostic believes or a world which is divine like the Pantheist suggests.

What is wrong?  Humanity rebelled against a creator – this reflects a cosmic dislocation between creator and creation and the world therefore is out of tune with its intention to be a place where the creator is glorified.  The evil is more than the product of environment or psychological explanations but rooted in the rebellion of humanity and of supernatural evil powers – but God is still sovereign over his creation.

What is the solution?  The creator God has acted, is acting and will act to deal with evil set up by human rebellion and to bring the whole world to its true purpose, in a new creation resonating with God’s presence and glory.  This action is focussed upon Jesus, His death and resurrection and the continued work of the Holy Spirit amongst God’s people i.e. those who have already been made part of God’s new creation by being placed in Christ instead of in Adam.

However, “Many Christians affirm Christian truth with regard to the gospel and supernatural matters such as sin, salvation, miracles, and prophecies, but they use scientific theories to explain and respond to immediate “natural events” such as illnesses, technology and business decisions.  This leads to an other-worldly Christianity and to the secularisation of everyday life.” [5]