This article was written to accompany the ‘The Death of Jesus’ hangout.

A few months ago, all that anybody could talk about was ‘the dress’.

One image, of one dress that divided the population. When some people looked, they saw a dress that was black and blue. Others saw white and gold. Almost everybody insisted that the dress couldn’t be anything other than what they saw. 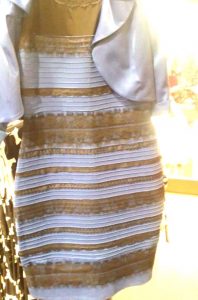 The same dress, yet perceived so differently by different people. Scientists say that it all depends on how your brain processes what you see.

Black and blue? White and gold? It depends how you look at it.

In a lot of ways, the death of Jesus is just the same.

The events of Good Friday can be viewed as the darkest and most hopeless day in human history, or they can be seen as the greatest and most glorious thing to have ever happened.

It just depends how you look at it.

It is not hard to understand why some people think of Good Friday as black and blue.

Look at these verses to remind you of what happened that day:

As they went out, they found a man of Cyrene, Simon by name. They compelled the man to carry his cross. And when they came to a place called Golgotha (which means Place of a Skull), they offered him wine to drink, mixed with gall, but when he tasted it, he would not drink it. And when they had crucified him, they divided his garments among them by casting lots. Then they sat down and kept watch over him there. And over his head they put the charge against him, which read, “This is Jesus, the King of the Jews.” Then two robbers were crucified with him, one on the right and one on the left. And those who passed by derided him, wagging their heads and saying, “You who would destroy the temple and rebuild it in three days, save yourself! If you are the Son of God, come down from the cross.” So also the chief priests, with the scribes and elders, mocked him, saying, “He saved others; he cannot save himself. He is the King of Israel; let him come down now from the cross, and we will believe in him. He trusts in God; let God deliver him now, if he desires him. For he said, ‘I am the Son of God.’” And the robbers who were crucified with him also reviled him in the same way.

Now from the sixth hour there was darkness over all the land until the ninth hour. And about the ninth hour Jesus cried out with a loud voice, saying, “Eli, Eli, lema sabachthani?” that is, “My God, my God, why have you forsaken me?” And some of the bystanders, hearing it, said, “This man is calling for Elijah.” And one of them at once ran and took a sponge, filled it with sour wine, and put it on a reed and gave it to him to drink. But the others said, “Wait, let us see whether Elijah will come to save him.” And Jesus cried out again with a loud voice and yielded up his spirit. (Matthew 27:32-50)

At first glance, it would seem as though nobody but Satan could be happy on such a day.

Notice some of the details that make the day so bleak:

Did you notice the way people spoke about Jesus, even though he was being crucified?

All of this speaks of the popular expectation the Jesus would be the Saviour-King, the Messiah who would put all things right.

But now that Messiah is hanging on a cross, and he doesn’t seem able or willing to do anything about it.

Good Friday appears to be a black and blue day because hope has been snuffed out.

Consider how horrific a crucifixion is.

In the West, such a death is (thankfully) outside of our experience, so it would serve us well to consider this type of death for a moment.

The English word ‘excruciating’ literally means ‘of the cross’. When we need a word to describe the most intense agony imaginable, what we say is that it is like a crucifixion – excruciating.

It starts with the physical pain. The victim is flogged on the back and body, with a whip that has shards of stone and bone enmeshed, and that can dig into their back and rip skin and flesh away. After this, they are forced to drag their cross beam to the place of execution – the heavy, rough wood dragged on the open back, adding to the pain with every step.

Naturally, the body falls forward, held in place only by the nails. But at such an angle it is impossible to breathe, so for each and every breath, the victim must push themselves upwards. The only way to do this is to push against the nails. Every breath is harder than the last, and the death is a long, slow suffocation.

This occurs in the midst of public shame. A crucifixion was not conducted behind closed doors, it was a public event that was supposed to serve as a warning to others. It was an opportunity for lowlifes and scumbags to get a kick out of the misery of others. People tried to make Jesus drink vinegar. They stripped him. They gambled for his clothes. They yelled abuse at him. His death was not one of dignity. It was a humiliation.

In addition to this is the spiritual agony. The verses indicate that the land went dark at the sixth hour. That is in the middle of the day. From noon to 3pm, everything was dark in the Middle East. This is significant. In the Old Testament, darkness is frequently equated with the anger of God. The darkness shows that as Jesus hung on the cross, God’s anger was being poured out upon him. He even cried out, “My God, My God, why have you forsaken me?”

And then he yielded up his spirit and he died.

Good Friday is black and blue because it proves that bad things happen to good people.

The worst thing happened to the best of us.

Perhaps Good Friday isn’t the right name for it after all?

Perhaps we should call it Bad Friday?

It depends how you look at it.

Jesus came to earth as a rescue mission. He gave his life as a ransom for many.

It would be wrong to think that Jesus had a plan for salvation that was somehow thwarted by the cross.

The cross was the plan.

Again, let’s pick out some details.

‘He Saved Others. He Cannot Save Himself.’

That is what they shouted to him, and that statement is more true than they realised.

The crucifixion is what it took to save others. Jesus had to die in order for us to know eternal life. Because of his death, we are welcomed into heaven and we can know God. That is why it is called Good Friday. We can stand pure and white and spotless before God, sharing in the gold of his victory.

When Jesus cried these words, he was quoting the first line of an ancient song from the book of Psalms (Psalm 22). This remarkable song describes crucifixion in great detail, hundreds of years before it was even invented.

Does any of this seem familiar?

I am a worm and not a man, scorned by mankind and despised by the people. All who see me mock me; they make mouths at me; they wag their heads; He trusts in the Lord; let him deliver him… I am poured out like water, all my bones are out of joint; my heart is like wax; it is melted within my breast; my strength is dried up like a potsherd, and my tongue sticks to my jaws… a company of evildoers encircles me; they have pierced my hands and feet… they stare and gloat over me; they divide my garments among them, and for my clothing they cast lots…

It is astonishing how closely this Psalm parallels the experience of Jesus.

By quoting the opening line of the song, Jesus is making reference to the whole song.

Now, look how that song ends.

All the prosperous of the earth eat and worship; before him shall bow all who go down to the dust, even the one who could not keep himself alive. Posterity shall serve him; it shall be told of the Lord to the coming generation; they shall come and proclaim his righteousness to a people yet unborn, that he has done it.

He has done it.

He has opened up the way for you and I to come to God.

He has conquered sin and death and given eternal life.

And right after Jesus died, this is what happened next:

Behold, the curtain of the temple was torn in two, from top to bottom…

In this symbolic act, the way to God that used to be barred is now wide open.

And the earth shook, and the rocks were split. The tombs also were opened. And many bodies of the saints who had fallen asleep were raised.

And that’s just the start of it.

Because of Jesus’ death, God does not see your sins and your wounds. He has taken your black and your blue and has dealt with it all.

In its place, you have been given robes of pure white righteousness and a golden crown on your head.

Good Friday is white and gold.

Perhaps we should rename it after all.

How about Flipping Fantastic Friday?